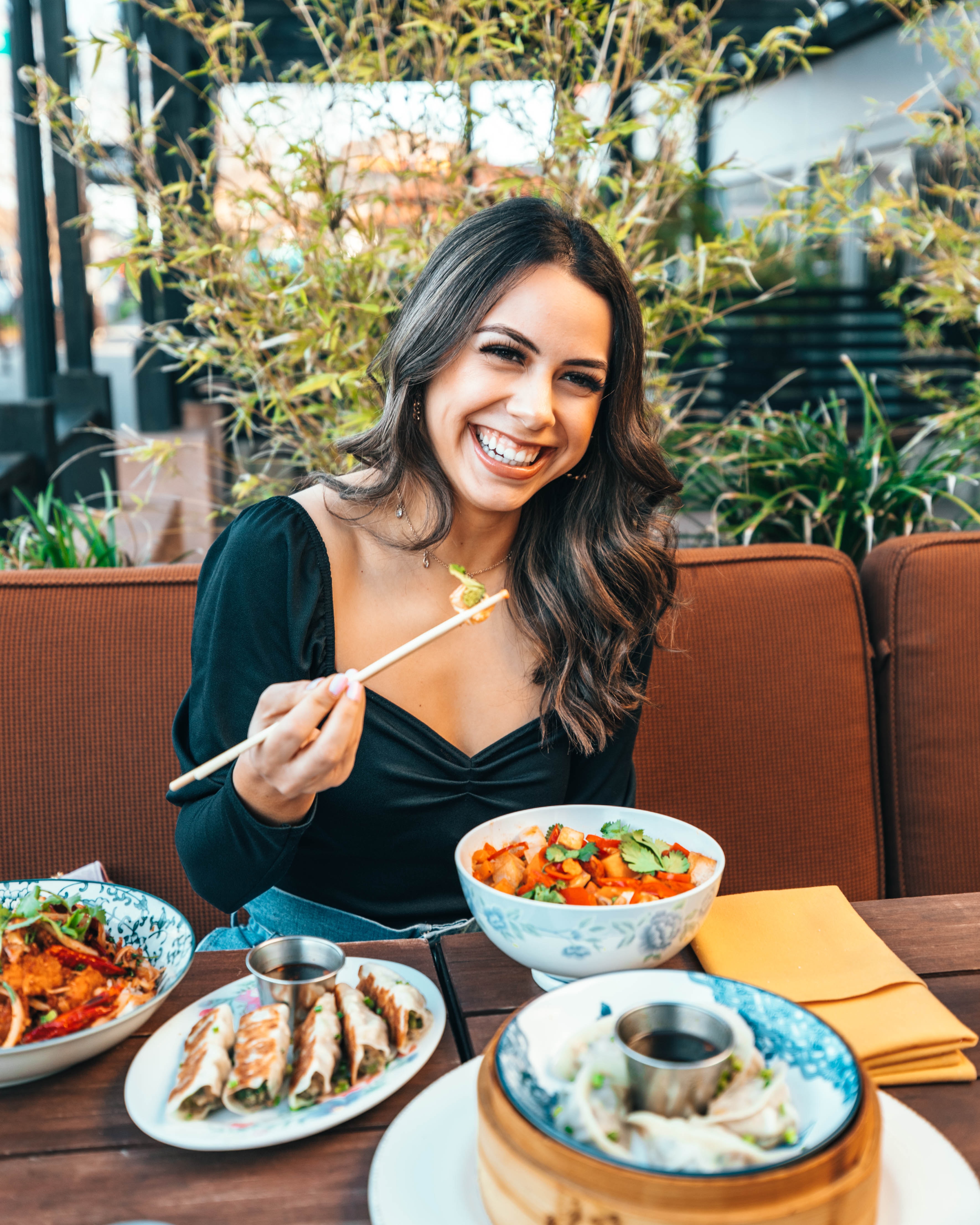 I remember there was a time when I religiously believed everything the billion-dollar fitness and diet industry tried to sell me. Especially the myth that carbs and sugar are BAD for you. After all, having a great body shouldn’t be easy, right? That’s why stunning physiques are purely reserved for those who put in the most work and restrict themselves the most, right? I lived a sad existence in which I could not any carbs after 2 pm including fruits and no foods whatsoever after 6 pm. I did that because some non-qualified fitness online advised people to do so. At night, I would be dreaming of food while chewing a whole pack of gum to curb my hunger. I would constantly think about food and was stuck in a vicious cycle of overeating every single day after my overnight fast. I broke out of this madness and am happier and healthier than ever. Here’s how I did it:

Get in tune with your body’s needs

I was restricting myself diet-wise to look better, feel better, and be healthier. But what really happened is that food was consuming my thoughts 24/7. Not only were these habits detrimental to my mental health but they also made me feel anything else but comfortable in my own skin. I was constantly over bingeing on so-called healthy foods like salads because these were the only foods I allowed myself to eat. After all, I had strict categories of good and bad foods. Also, I was just so hungry during the day since I would never eat after 6 pm. This led to me being bloated, full, and sluggish all the time. Hence, I was far away from my goal of feeling sexy. Without a doubt, what is going on in your mind can affect your physical health. But my mind and body were completely disconnected from each other. I would crave things like banana bread but instead, I would eat tuna and eggs and be completely unsatisfied. I took a look at other women who have a naturally lean physique and to my surprise, their diets often wouldn’t consist of mountains of grilled chicken breast. I would see a lot of them eating rather pleasant feel-good foods just not tons of it. I started to fantasize about that being me but I was way too deep in my oxic habit of considering some foods off-limits that it was difficult to make a change. Sometimes all I wanted was a cookie but since carbs and sugar equaled bad for me, I would instead eat a huge salad with triple the calories that did not hit the spot AT. ALL. This brings me to my next point.

There is one book in particular that inspired my transition into Intuitive Eating called Skinny Girls Don’t Eat Salad. A former swimsuit model and fitness junkie tells her story of how she went from restricting herself (which often led to overeating) to having a healthy relationship with food. The title in particular caught my attention. Like I mentioned before, I often observed women that are in shape and HEALTHY. I did not see them restricting themselves or obsessed with food. I grew up going on various vacations to the South of Europe such as Spain, Italy, or France. I saw a ton of beautiful healthy women who would not follow any kind of fad diet. French women would eat their croissant with joy, Italian women would enjoy their homemade pasta with a glass of red wine, and Spanish women would have really late dinners that go against any intermittent fasting rule. Notably, they all really enjoyed food AND life. In addition to looking stunning, I noticed that most of the women in the countries tend to live very long and healthy lives.

My journey to food freedom and mental health

Now that I spent a good amount of time talking about what didn’t work, let me get to the part where I fixed it. I unintentionally did something that experts call “Going all in.” Fitness YouTuber Stephanie Buttermore has famously documented her All-In-Diet journey. To give you a very short and straight-to-the-point explanation: after you have spent a long time restricting yourself, you relearn to feel hunger cues, to stop full, what your body needs, and basically everything that intuitive eating entails. I went through something similar without noticing it. When I first moved to Miami, I thought that everyone here looks absolutely fabulous and put that same pressure on me. Plus, starting an intense MBA program as well as the hot weather all curbed my appetite. I was eating a very low-calorie diet plus doing cardio every day. Not only was I restricting myself but I was also denying my body the fuel it needed. There were times when I broke down because of that. After I graduated, I worked a very taxing job with lots of standing and often no breaks until the very end of the workday. At that point, I just couldn’t take it anymore. I turned into a bottomless pit when it came to eating. I would only have an unpaid 30-minute break where I would stuff myself with everything I could find in the cafeteria. Moreover, I had equally big breakfasts and dinners. The numbers on the scale started to go up rapidly. Eventually, I regulated this behavior when I got a less stressful office job and fell happily in love.

The way through a woman’s heart goes through her stomach

Newly in love with a like-minded foodie, I would eat around town with my new boyfriend and explore all different kinds of restaurants. Funnily, this did not only restore a healthy relationship with food for me. But also bounced back to a weight I was very at without even trying hard. I was like I unintentionally died the All-In-Diet. I learned

1) what my body needs

2) when to stop eating when I had enough

4) and that you can be in your desired shape without dieting and restricting yourself.

I pretty much ate everything I wanted. We would often order dessert (if not each time we go out). The key to intuitive eating is not the same as “everything in moderation” as it has nothing to do with restriction. Once you are in tune with her body, you will automatically stop at a few bites of the cake because you do not want to get in a sugar rush. Equally, you won’t eat too many fatty foods that make you feel sluggish. And you will most likely crave something fresh and light for dinner after eating a heavier lunch.

Last but not least, I like to conclude by saying that I believe that not restricting yourself, or not categorizing food as good or bad, makes less healthy food options less exciting for you. It is like the forbidden fruit effect where you really want something just because you cannot have it. If you stop giving chocolates so much importance, you won’t crave them as much. When I was in my dieting phase, I could never control myself around foods like that. Now, I peacefully co-exist in my house with all types of foods and mainly turn to the healthier option as they give me the fuel I need, make me feel better, and make my skin glow. When I want some chocolate, I just eat a piece and move on. Even the sound of the word “cheat day” makes me cringe as I find it extremely toxic to harshly restricting yourself and then binge on one day of the week.

Obviously, I am not a dietitian or nutritionist, so this article is purely an opinion piece. But if you want to get more information, you can find a lot of registered dietitians post useful information on the topic when you follow #intuitiveeating on Instagram.